Commentary by Dr. Whitesel: A colleague sent me an unusual advertisement for beer that utilized Wesley’s comments. Printed at the height of the Temperance Movement, it apparently was an attempt to make Wesley an advocate for their beer. However as my colleague Al DeFilippo points out, it was quickly challenged as inaccurate. For more on this interesting debate, as well as insight into Wesley’s own personal habits see my colleague Al DeFilippo’s posts below: 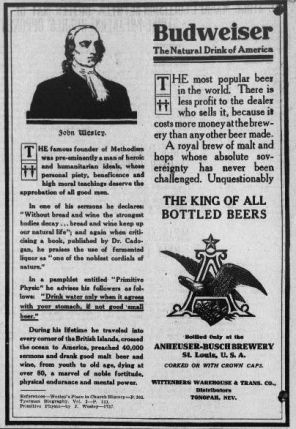 On August 19, 1908, the edition of the religious paper, The Western Christian Advocate, a publication originating in 1834 and published from Cincinnati, Ohio, printed a rebuttal to this John Wesley Budweiser Beer ad. The title of this editorial answer to the advertisement was A Vile Brewers’ Slander. The arguments against this John Wesley Budweiser Beer ad argument are listed in great detail. Below are some of the key points from the article.

“Of course, it is very easy to point out that, even were all this true, Wesley was born more than two centuries ago, (now three centuries), and lived and wrote in a day when comparatively no one recognized in any adequate degree the evil of drink. It is easy, too, to point out that Wesley was a pioneer in recognizing the drink evil and that his utterances upon many points connected with the drink evil would be considered radical even today.”

The article about the John Wesley Budweiser Beer ad doesn’t stop there. The writer quickly points out that:

“The brewers’ advertisement makes three references to Wesley’s writings. Each of them is a falsehood or a misrepresentation amounting to a falsehood.”

Responses by can be found at the link below from Dr. Kenneth Kinghorn, Professor of Church History and Historical Theology, Asbury Theological Seminary, Wilmore, Kentucky; Dr. Ben Witherington III, Amos Professor of New Testament for Doctoral Studies at Asbury Theological Seminary among others … http://www.francisasburytriptych.com/response-to-john-wesley-budweiser-ad/

Here is gist of their comments:

Kenneth Kinghorn:  “Wesley was, of course, strongly opposed to ‘spirituous liquors’ (distilled liquor) which has a high alcohol content. He drank some ‘small beer,’ which is very low in alcohol content. Regular beer had a higher alcohol content–perhaps safer than some water sources.

Ben Witherington: “What you seem to be missing in regard to Wesley himself,  is that ‘spirituous liquors’ is a term for strongly alcoholic beverages, for example, whiskey.   It is not a term for wine or beer.   Wesley did not oppose low alcoholic beer for wine or consumption.  He was not a teetotaler.  You are right of course that the Bud ad was an attempt to co-opt Wesley in the age of prohibition, and head off it’s passage.”