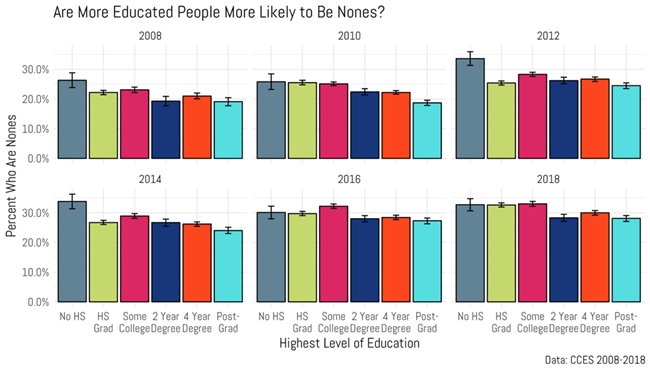 Commentary by Dr. Whitesel: I would encourage my academic colleagues and administrators to read carefully this book. It offers strategic insights, as well as some cautions on the way forward.

William F. Buckley Jr.’s 1951 book God and Man at Yale popularized a view of higher education as hostile to faith. A new book, however, The Resilience of Religion in American Higher Education (Baylor University Press), finds faith alive and well in American higher education. The authors find that resilience evident both at public and private institutions. And they find it at religious institutions with varying ideas about their missions.

To be sure, the book does not present issues of religion in American higher education as simple or without tensions. But they find “a surprising openness” to religion in academe.

The authors are John Schmalzbauer, a professor of religious studies at Missouri State University and the author of People of Faith: Religious Conviction in American Journalism and Higher Education, and Kathleen A. Mahoney, a senior staff member at the GHR Foundation and author of Catholic Higher Education in Protestant America: The Jesuits and Harvard in the Age of the University. They responded via email to questions about their new book.

A: Public and nonsectarian private universities are some of the most religiously diverse places in America. Since the ’60s, they have witnessed an increase in the sheer variety of religious activity, reflecting the rise of campus evangelicalism, the revitalization of Jewish student life, a surge in new immigrant religions and the emergence of alternative forms of spirituality. At the same public university where Coach John Wooden and Kareem Abdul-Jabbar forged an interfaith friendship, religious diversity flourishes. Today the University of California, Los Angeles, is home to nearly 50 religious groups, including the first Campus Crusade chapter, the first Chabad House, a large Hillel building, a 54-year-old Muslim Student Association, a Coptic Orthodox Christian club, a Methodist cafe and a University Buddhist Association. Across the country, private philanthropy has supported dozens of ventures at secular institutions, including the Lilly Endowment’s recent vocation initiative and Yale University’s $75 million Roman Catholic center.

Responding to this diversity, the field of student affairs is rediscovering a more holistic understanding of student development that recognizes religious, secular and spiritual identities (the focus of two recent NASPA gatherings). A growing number of secular institutions have constructed multifaith chapels and meditation spaces, catering to both people of faith and the spiritual but not religious. A burgeoning interfaith movement has tried to connect these diverse communities, though recent findings from the IDEALS survey suggest that universities could do more to foster an inclusive climate.

Q: What is your sense about the directions of scholarship about religion at secular institutions?

A: Over the past 50 years, religion departments have proliferated at public and nonsectarian private institutions. Religion-oriented centers and institutes can be found at Columbia, Colorado, Indiana, New York University, Princeton and the University of Southern California. Most of these centers focus on “religion and” topics, exploring the role of faith in politics, health care and popular media. In the wake of the 2016 election, scholars in history, sociology and political science have investigated the roots of religious nationalism in America and around the world. While some religion scholarship is a version of “knowing your enemies” (Peter Berger’s apt expression), others have cultivated a more empathetic approach, though the current political climate has strained this capacity for scholarly empathy. In the face of resurgent racism, sexism and xenophobia, religion scholars are taking a stand.

Commentary by Prof. B.: One of the most life changing ministries I’ve seen a local church embrace is the Kids Hope USA program utilized by College Wesleyan Church in Marion, Indiana.

Here is an overview:

“College Wesleyan Church just finished its seventh year in partnership with Frances Slocum Elementary.  Our partnership has created ways for the church to be intentional in loving our community better.  There are many ways volunteers can invest in Frances Slocum Elementary to build relationships, encourage teachers and staff, and work together to build a stronger community with families.

“One way is through our mentoring program with Kids Hope USA. Kids Hope continues to be a strong academic, social and emotional support system for students and teachers. This year we mentored 85 students each week through Kids Hope in the school.

Another way volunteers are involved at Frances Slocum is through our adopt a teacher/staff ministry. We want all teachers/staff members at Frances Slocum to know they are loved, valued, prayed for, and admired! CWC made the intentional decision to provide an encouragement partner to each member of the Frances Slocum family. Encouragement partners from CWC offer support with notes and small gifts along with prayer. “Receiving a gift or a note of encouragement from my CWC family is a consistent reminder that I am not in this alone. It’s amazing to know that I have someone praying for me and my students on a regular basis,” said Mr. Evans, a third grade teacher at Frances Slocum. Teacher luncheons for teachers and staff is another avenue we use to support and encourage. The first Wednesday of each month the hallways of Frances Slocum are filled with the sweet smells of homemade soups, freshly baked desserts, and fresh salads. Twelve volunteers from CWC work on a rotation to supply a lunch to the teachers/staff at Frances Slocum. Teachers come to the lounge, gather around tables, laugh and talk as they are served lunch by our CWC Body. We want to thank each soup maker, salad creator, dessert baker, server, and lounge hostess for their faithfulness this school year. Your acts of love are appreciated and making a difference in the lives of our Frances Slocum teachers/staff….

Many volunteers continue to support and serve our community throughout the summer.  Our partnership with families at Frances Slocum continues through the summer through relational events. Our church sends over 50 kids to summer camps.  We do Kids Hope summer backyard parties.  We do popsicle parties in neighborhoods where our kids and families live.  We help kids earn bikes through our Tandem Bike ministry.  Last summer over 10 kids earned a gently used bike through  doing community service.” (retrieved from http://www.collegewes.com/2017/06/08/frances-slocum-partnership-year-in-review/)

They signed up retired members of the congregation to volunteer one lunch break each week to meet with a mentee and help them with their homework. Not only is this giving purpose and opportunities for retirees, but it’s also raised the educational level of Francis Slocum School. Kids Hope USA is national program they’ve adopted for missional impact.  Here is more info: https://kidshopeusa.org/mentor-program/

Regardless, the program leverages the expertise of our senior citizens which are a growing percentage of our culture with many of the latchkey children that struggle in our schools.

“The University of Phoenix is perhaps the most well-known for-profit college in the country … Between 2010 and 2017, student enrollment fell by 70%. The downsizing is likely doing little to boost employee morale. According to data obtained from Glassdoor, only 32% of University of Phoenix employees would recommend working at the school to a friend.“

Commentary by Professor B. The research cited in this article demonstrates that the ROI, return on investment, for ministry degrees is still significant. When the Christian leader factors in their call from God, a seminary education that sharpens the leaders skills not only is a good investment fiscally, but more important missionally.

(To understand the methodology used in the survey see the link below.)

A new Pew Research Center report on higher education contains a number of findings about the rising value of a college degree (as well as the rising cost of not going to college). College-educated millennials are outperforming their less-educated peers on virtually every economic measure, and the gap between the two groups has only grown over time. Here are six key findings that provide a compelling answer to the question: Is going to college worth it?

1A college education is worth more today. There’s a wider earnings gap between college-educated and less-educated Millennials compared with previous generations.

2College benefits go beyond earnings: In addition to earning more, college-educated Millennials also have lower unemployment and poverty rates than their less-educated peers. They’re also more likely to be married and less likely to be living in their parent’s home.

3College grads are more satisfied with their jobs: College-educated Millennials are more likely to see themselves on a career path, rather than just working at a job to get them by.

4The cost of not going to college has risen. Millennials with just a high school diploma are faring worse today than their counterparts in earlier generations by almost every economic measure examined.

5College grads say college is worth it: About nine-in-ten college grads in every generation say college has been, or will be, worth the investment. Despite a steep rise in college tuitions, Millennials agree.

6College majors matter. Among all grads, science or engineering majors are the most likely to say their current job is very closely related to their field of study and the least likely to say that a different major would have better prepared them for the job they really wanted.

According to the infographic produced by Westminster Bridge Student Accommodation (WBSA), if you don’t organize and review your notes within the first 9 hours, 60% of what you have learned will be forgotten. Writing down and reviewing your notes is important because you may not have any ideas how to apply what you have learned at the point when you receive the information. Reflecting on them later may be more effective…
Read more at … http://www.lifehack.org/articles/productivity/the-ultimate-guide-note-taking-infographic.html?n=1&ref=tp