This interactive tool complements the first and second releases; the first report focuses on the changing religious composition of the U.S. and the demographic characteristics of U.S. religious groups, while the second report looks at religious beliefs and practices as well as social and political views for the U.S. adult population overall and for specific religious traditions.

“African-Americans stand out as the most religiously committed racial or ethnic group in the nation.”

While the U.S. is generally considered a highly religious nation, African-Americans are markedly more religious on a variety of measures than the U.S. population as a whole, including level of affiliation with a religion, attendance at religious services, frequency of prayer and religion’s importance in life. Compared with other racial and ethnic groups, African-Americans are among the most likely to report a formal religious affiliation, with fully 87% of African-Americans describing themselves as belonging to one religious group or another, according to the U.S. Religious Landscape Survey, conducted in 2007 by the Pew Research Center’s Forum on Religion & Public Life. Latinos also report affiliating with a religion at a similarly high rate of 85%; among the public overall, 83% are affiliated with a religion.

The RLS surveys more than 35,000 Americans from all 50 states and analyzes the relationship between religious affiliation and various demographic factors.

Explore religious groups in the U.S. by tradition, family and denomination at … http://www.pewforum.org/religious-landscape-study

A couple of months ago, I put together a graphic showing the political positions of American churches and religions. My analysis was based on Pew’s 2007 Religious Landscape survey, which included more than 35,000 people. 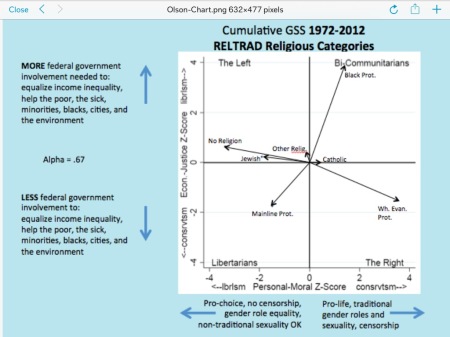 My work received a lot of attention. One of the most fascinating pieces of the graph was the position of people who belonged mainline churches. Despite the liberal positions of clergy and church leaders, mainline Protestants are some of the most conservative on economic issues. Mainline Protestants favored a smaller government that provided fewer services. The mainline churches could be described as “libertarian” because they also favored a government that stayed out of policies protecting morality.

Dan Olson and Ben Pratt of Purdue University crunched a different set of numbers but came up with remarkably similar results. They presented some of their results at the Society for the Scientific Study of Religion meetings last week…