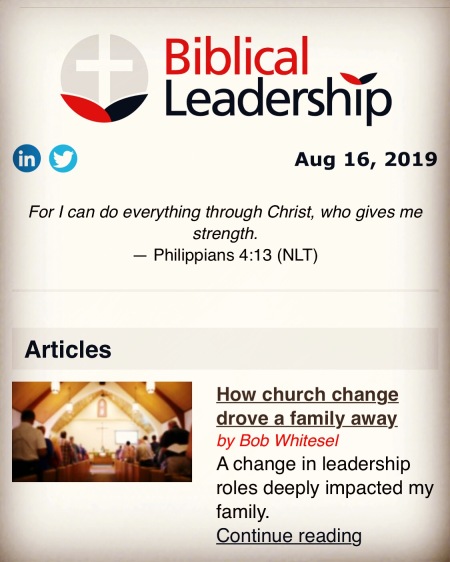 It just happened one Sunday in 1962. My dad stopped going to church. Mother and I still attended, at least for the next year or so. But soon, our entire family no longer frequented the church my parents had attended since they were married.

Dad had been the head usher for the second of three Sunday services in this church of 1,500 attendees. In that role, he had organized 16-20 men each Sunday to receive the offering and help congregants find seats. Planning was minimal. Dad was supervised by Bill, the church’s Usher Supervisor who recruited, selected, trained and mentored ushers. Bill was an engineer for Delco-Remy, where he led an entire department in the burgeoning lighting division.

However, my father’s duties as head usher for the second service were more straightforward. Dad had to ensure that each usher had enough bulletins, that ushers were at all entrances, and on occasion he had to conscript ushers from the audience if someone was missing. This was his close-knit fellowship, and he often remarked that not since his World War II days had he enjoyed such camaraderie.

Dad also prayed over the offering. And because his prayer never changed, I can recall it to this day; Gerald was a relational leader who liked consistency, uniformity and reliability. Because he exemplified these traits, he had been head usher of the second service for four years.

Why would a man of such consistency and reliability suddenly disconnect himself from his church?

As a child I never understood, nor inquired. But, once grown I had occasion to ask my dad about his departure. Gerald’s disappearance was due to an honor. The faithful discharge of his duties as a head usher, had brought him to the attention of the church leaders. When Bill, the Usher Supervisor quit, Gerald was the natural choice to replace him. After all, my dad was head usher for the largest of three services. He was faithful. Dad was honored, but also wary. None-the-less after some gentle prodding by the church leaders he was “rewarded” with a promotion to Usher Supervisor.

In this new capacity, Dad was now thrust into a leadership role that required oversight of 60 plus men. His duties now included scheduling and organizing ongoing usher training, recruitment and oversight as well as replacing ineffective ushers. Dad had enjoyed his duties as head usher of one service, but now his responsibilities doubled if not tripled. While his previous duties had been largely relational, now his tasks were increasingly organizational. Dad missed the interpersonal nature of his previous duties, and now saw himself increasingly isolated from the fellowship and camaraderie he had previously relished.

Additionally, the usher ministry suffered. Dad found it difficult to schedule pertinent and timely training, and he never felt comfortable with the recruitment and dismissal process. He was a man everyone liked, and he found it hard not to utilize a willing usher candidate, simply because of lack of skill, decorum or call.

The church leaders noticed this decline in the usher’s ministry. And, they subtly tried to work with Gerald. They tried to develop him into a director, who could oversee 60 plus men, and three different worship services. In the end, this was not Dad’s gifting or calling. He had been a successful sergeant during World War II, and he had successfully led a small team of men. But when it came to the oversight, tactical planning, recruitment and paperwork necessary to administer a burgeoning ministry, Dad did not enjoy it, nor did he feel he was called to do it.

The church leaders did not want to see Gerald quit, but the atmosphere of pressure and disappointment became too much. Without an avenue for retreat, one day Gerald simply called the church office and resigned. Dad was a gracious and loving man. But, the feelings that he had let down his church and lost his camaraderie were too much. Dad couldn’t bear to see the looks of the other usher who he felt he had failed as their leader, and thus returning to church was too uncomfortable to bear. He simply faded away, and soon our family did as well.

In adulthood, I began investigating leadership styles and in hindsight always wondered what happened to my Dad’s volunteerism. He had been so content and fulfilled as a sergeant in the military. But at church, his involvement had led to disappointment and failure. As I researched leadership abilities, I found that the military had an insightful understanding of leadership sectors, that might benefit the church. And, it has to do with three military leadership categories: strategic leaders, tactical leaders and relational leaders.[i]

[i] Within military leadership theories there are many nuanced categories. However, to keep the present discussion from becoming too unwieldy, we will focus on the three broad categories of strategic leadership, tactical leadership and operational (i.e. relational) leadership. For a good overview of the historical importance and tensions of the top levels of military leadership see, Mark A. Stoler, Allies and Adversaries: The Joint Chiefs of Staff, the Grand Alliance, and U.S. Strategy in World War II (Chapel Hill, No. Carolina: The University of North Carolina Press, 2000).

(Click the following link for a short, self-scoring questionnaire to discover your 3-STRand leadership mix: https://churchhealthwiki.files.wordpress.com/2020/11/3-strand-leadership-questionnaire-c2a9bobwhitesel-fillable.pdf)

In the military, relational leaders are the men and women who lead skilled teams on critical assignments. They have an immediate, urgent and vital task to perform. They may not see where their efforts fit into the bigger picture, but they are the masters of relational leadership. They lead an intentional and personal effort to build a team of interdependent soldiers. While the key to strategic leadership is forecasting and theorizing, and the contribution of tacticians is precision and allocation, the skill of the relational leader is his or her connection with their team and the ability to think creatively, improvise, adapt and be successful.

These are the skilled craftsmen that build a house and give it the working components. They are often knowledgeable in a certain predefined field such as electrical, heating/cooling, framing, etc., because of the complexity of the task. And, they like to see the immediate results of their hands. One relational leader told me, “I like to see immediate results from what I am doing. I do not have the patience to wait for an outcome. That is why I am a painter. I like to see the results right now from what I am doing.”

In contrast, the strategic leader may wait years to witness the culmination of a project, and thus may leap to a new idea before the first has come to fruition. The tactical leader is also patient in waiting for the project to be completed, but the tactical leader finds it rewarding to see that progress is being made and the end goal is getting nearer. However, for relational leaders, seeing immediate results in even small steps is one of the most rewarding parts of the process.

My dad was a sergeant in the military, and initially a relational leader who led his small team of second service ushers successfully for four years. Like many relational leaders in our churches, Dad enjoyed getting the job done. I often remember how fulfilled and satisfied he was after church, where he had faithfully discharged his duties with his team.

In the change process

During the change process these are the church leaders who get things done. They often see things from the viewpoint of their task. If they are an usher, then as my dad, ushering seemed like the most important job in the church. Still my dad, like many relational leaders today, knew that the church was an organic organism of many functions and ministries (1 Corinthians 12:12; Ephesians 4:11-13). But Dad so enjoyed the task at hand, that at least for him and his giftings this was the most important job imaginable. As a result, he discharged his duties with speediness, precision, care and results.

Relational leaders have the knowledge, skill, relational abilities and dedication to get a job done. Once the parameters are defined and they see how their task fits into the bigger picture (they are helped in this by the tactical leader), the relational leader can accomplish almost anything. Anthropologist Margaret Mead observed, “Never doubt that a small group of committed citizens can change the world. Indeed, it is the only thing that ever has” [xxvii]. And, thus the contribution of the relational leader is critical to the change process.

Relational leaders often love their job so much that they do not see themselves “moving out” of this role in the foreseeable future [xxviii].

This is the fourth article in a series of articles on 3-STRand Leadership. Check out the third, “What is tactical leadership?” by Bob Whitesel. Click here for footnotes.