Commentary by Dr. Whitesel: Mark DeYmaz & I  just finished a “How-to Guide” for churches seeking to transition into a multi-ethnic churches, titled re:MIX – Transitioning Your Church to Living Color.  This article provides some background.

Dr. E. C. Morris (1855-1922) was a highly respected African-American minister, politician, and business enthusiast. Recognized by white Arkansans and throughout the nation as a significant leader of the Black community, he often served as a liaison between Black and white communities on both state and national levels… Nearly 130 years ago, then, Morris saw in Acts 17:26 a biblical mandate for multi-ethnic church unity and diversity. In 1885, he wrote:

“Class and race antipathy (a deep-seated feeling of dislike; aversion) has carried so far in this great Christian country of ours, that it has almost destroyed the feeling of that common brotherhood, which should permeate the soul of every Christian believer, and has shorn the Christian Church of that power and influence which it would otherwise have, if it had not repudiated this doctrine. The whole world is today indebted to (the Apostle) Paul for the prominence he gave to this all-important doctrine at Mars Hill. We know that the doctrine is not a popular one and that none can accept and practice it, except such as are truly regenerated. But the man who has been brought into the new and living way by the birth which is from above, by contrasting his own depraved and sinful nature with the pure, immaculate character of the Son of God after mediating what that matchless Prince underwent for him, can get inspiration and courage to acknowledge every man his brother who has enlisted under the banner of the Cross, and accepted the same Christ as his Savior.”  (Read more … http://www.christianpost.com/news/the-multi-ethnic-church-a-historical-challenge-114703/)

“The number one commonality I see in evangelistic churches is a pastor who leads by example. Here are 10 ways pastors can lead their churches to be more evangelistic ….

3. Become accountable to someone else for sharing the gospel…

6. Include evangelism in new members classes…

See this graph for the percentage saying blacks in their community are treated less fairly than whites. This demonstrates an ongoing wide racial divide on how much progress has been made.

“In a survey conducted last year before the 50th anniversary of the March on Washington, the Pew Research Center found that fewer than half (45%) of all Americans said that the U.S. had made substantial progress toward racial equality since that historic event, while 49% said a ‘lot more’ needs to be done.”

Most See Inequality Growing, but Partisans Differ over Solutions
by from Pew Research Center

“America is in the throes of a demographic overhaul. Huge generation gaps have opened up in our political and social values, our economic well-being, our family structure, our racial and ethnic identity, our gender norms, our religious affiliation, and our technology use.” 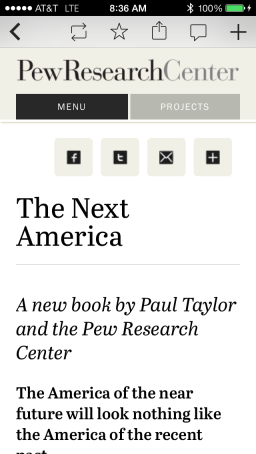 Each year, the Christian Community Development Association (CCDA) national conference draws more than 2,500 people from around the world to share in best practices of Christian community development (CCD). Practitioners teach workshops around relevant themes and find support by networking with others facing similar challenges. Partners offer valuable resources, assisting practitioners in their community transformation efforts. Advocates bring attention to issues affecting people at the grassroots level. And provocative speakers challenge our assumptions about what it means to embody Christ’s love as we journey together in our marginalized communities.