It’s been six years since psychologist and University of Pennsylvania Professor Angela Duckworth published her bestseller Grit: The Power of Passion and Perseverance. After more than two years of behavioral and societal shifts that have drastically altered cultural values around work and achievement (see: the Great Resignation), Duckworth discusses Grit in hindsight in the first episode of The Next Chapter, a new podcast created for the American Express Business Class platform, out today.

For Duckworth, the tenets of Grit still hold true—that high-achievers are people who not only possess passion, but who also persevere. But, especially in these post-pandemic years, finding passion, or a directional focus, an be difficult and confusing. “For many of us, work ethic, getting feedback, practicing things we can’t yet do, being resilient—all that is easier than knowing what to be persevering about,” she says.

…“When someone is super-gritty, it’s because they’re pursuing something they really love and they actually feel there’s hope to make progress on [it],” Duckworth says. “One reason people might be burning out right now is that, for whatever reasons, there is some erosion of that hope that the future is bright for what they’re doing.”

…“The lesson in the pandemic is that if we want to be grittier or if we want to understand how to make other people grittier, there has to be some valid sense of hope for that person—that what they’re doing is going to be enough and that the future has some reason to believe that it’s brighter,” Duckworth says.

2. Connect workers to a higher purpose …

3. Establish a culture of grit …

Even on the biggest stage of Foles’ life, with literally millions of armchair quarterbacks waiting to throw their beer cans at the screen, it’s just football. Given what Foles has been going through with his wife having serious health problems and a terrible prior year with the St. Louis Rams that nearly made him retire, it’s just football.

Foles went on to say that the sentiment of the text was true and that it settled him down. A settled Foles meant he leveraged one of his greatest strengths, what fellow Eagle players have called “tremendous poise”. That poise led Foles to Super Bowl MVP honors.

Read more of the article “Nick Foles’ Pre-Game Text From Drew Brees Is a 3-Word Secret For Succeeding Under Pressure” at https://www.inc.com/scott-mautz/nick-foles-pre-game-text-from-drew-brees-is-a-3-word-secret-for-succeeding-under-pressure.html

…So what is grit, exactly?

Grit is defined as the ability to rebound from challenges, self-reflect, and work even harder next time. You may know it as persistence, endurance, perseverance, or plain old stick-to-itiveness…

If you are a driven individual pushing for success, the question is not “Do I have grit?” Instead, you likely are more interested in what you can do to strengthen and sustain your already persistent nature. The good news is that grit is something you can work to improve…

If you can align your goals with a vision and purpose that is greater than yourself it can be easier to keep going when you are not doing as well as you hoped. If you find a disconnect between your goals and your accomplishments, reevaluate what you are striving for and why. Life is short and without purpose-driven goals, it will be difficult to summon strength when challenges arise.

Find a mentor or peer group who understand your goals and who can offer honest feedback and encouragement when times get tough. Do not be afraid to ask a leader you admire to grab a cup of coffee — you will be surprised at how many people will want to share their knowledge to help you achieve your goals. Seek out peer groups on LinkedIn, through alumni organizations, or networking groups that relate to your field.

When faced with a roadblock, take a moment to envision the end result you desire. When you visualize success, you are actually training your brain for that outcome. Athletes have used this technique for years, but you can apply it to your own goals. Practice mental imagery daily. To reinforce the positive message write down in detail how your success will play out.

Beware the tendency to slow down once you have made some initial strides. It is all too common for people to see some progress and lose momentum. Commit to progress checkpoints. Schedule conversations with your support team. Write a letter to yourself about why you want to achieve this goal to be read in the event you lose steam. Do whatever you can to make backslides impossible.

There is no getting around it — you have to put in the hours if you want to see a payoff. Eliminate procrastination, time-wasters, and disorganization. Prioritize your most important tasks and set aside time to tackle less pressing matters. Use your goals as your north star. Quickly analyze requests and do not be afraid to say no to something that does not add value.

Ever feel like you just wanna give up on something? How can you develop the inner strength necessary to achieve your long term goals?

Turns out that grit — the perseverance that keeps us going — is a lot more important than you might think. In fact, it’s the best predictor of success among West Point cadets.

From Drive: The Surprising Truth About What Motivates Us:

The best predictor of success, the researchers found, was the prospective cadets’ ratings on a noncognitive, nonphysical trait known as “grit”—defined as “perseverance and passion for long-term goals.”

From Grit: The Power of Passion and Perseverance:

So we all need more grit. But how do we get there? I decided to call an expert…

In 2013 Angela Duckworth was awarded the MacArthur “Genius” Award for her work on grit.

She’s a professor at the University of Pennsylvania and author of the book, Grit: The Power of Passion and Perseverance.

…Here’s what Angela says will build that inner strength and make you gritty:

• Pursue what interests you: You’re not going to stick it out if you don’t care.
• Practice, practice, practice: It’s not just how you get to Carnegie Hall. We love doing things we’re good at.
• Find purpose: How does what you do help others? That’s what makes a job into a calling.
• Have hope: No “wishing on a star” here, pal. Have hope because you are going to make it happen.
• Join a gritty group: Mom was right; spend time with slackers and you’ll be a slacker.

So you do all of these things and become a Tyrannosaurus of grit. Awesome. Know what else you will be?

Angela surveyed 2000 people and the results were clear: “I found that the grittier a person is, the more likely they’ll enjoy a healthy emotional life.”

I was talking to Brad Stevens who’s the coach of the Boston Celtics. He said, “I’ll never be the coach I want to be, but it sure is fun trying.” It’s not that gritty people are necessarily content in the comfortable sense, but they are content in the sense that they enjoy the pursuit of excellence and there’s nothing they’d rather do than keep trying to get better everyday.

Everyone today is concerned with work-life balance. It’s nice to know that the same quality that can make you a success in your career can help promote happiness at home.

“A UPenn psychologist uses the ‘Hard Thing Rule’ to teach her kids to take control of their success” by Shana Lebowitz, Business Insider Magazine, 5/8/16.

…Angela Duckworth, a professor at the University of Pennsylvania whose new book, “Grit,” offers research and anecdotal evidence on how passion and perseverance lead to success.

Towards the end of the book, Duckworth gives readers a glimpse into how she applies her findings on grit in her own life, specifically with her two daughters…

1. Everyone in the family has to do something that’s hard.

2. You have to finish what you start.

“…Or if I’ve paid the tuition for your set of piano lessons, you’re going to take all those lessons and you are, as you promised your teacher, going to practice for those lessons.”

3. No one gets to pick the hard rule for anyone else.

“Even when my kids were five [and] six years old,” Duckworth said, “they were given some choice in what their hard thing was.”

“I think it’s very important to send the message that, while parents are needed to remind you to practice and occasionally force you to finish things … they also need to learn to respect you. You as an individual ultimately are the captain of where you’re going…”

The point is for parents to help their kids find something they’re interested in and then help grow that interest, while at the same time modeling grit and showing how far it can take you.

Leaving a high-flying job in consulting, Angela Lee Duckworth took a job teaching math to seventh graders in a New York public school. She quickly realized that IQ wasn’t the only thing separating the successful students from those who struggled. Here, she explains her theory of “grit” as a predictor of success (previous is quoted from the TED Talk introduction).

… The science shows … Students who believe they can do better with more effort, who try harder, who can delay instant gratification and control their impulses, who take feedback well and know how to work on teams, are likely to become happier, healthier, more successful adults.

What’s missing right now, though, is a consensus on how best to cultivate those qualities…

Commentary by Dr. Whitesel: “When evaluating church planters, I often look at their history of ministry and employment. If I see persistence in that history, I know that

usually they will be successful in planting a church. And this research confirms it: tenacious, positive, persistent people are the best planters.” 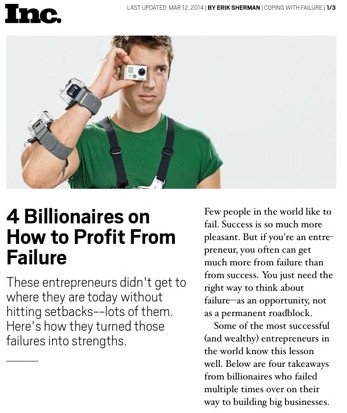 4 Billionaires on How to Profit From Failure
by Erik Sherman, 3/12/14, Inc. Magazine

“These entrepreneurs didn’t get to where they are today without hitting setbacks–lots of them. Here’s how they turned those failures into strengths.”