Commentary by Dr. Whitesel. Researchers have found that if you attach a storyline to a vision statement, then the vision is three times more likely to come about. Take a look at this example. Would you promote Version 1 or Version 2 on a website?

… Version 1: Jeff had an enviable, cushy Wall Street job that he probably would have stayed at for years had not fate intervened.

One day, Jeff’s boss gave him the assignment of analyzing a new industry. Jeff was amazed by what he learned, namely, that it was growing at an unbelievable 2,300% per year. He had to be part of it. Jeff quit his job and he and his wife packed up the car. While she drove West, Jeff pounded out a business plan to sell goods – first books and later everything – over the newfangled internet.

Compare that to this stoic version of the same facts.

Version 2: Amazon.com is an e-commerce company founded by Jeff Bezos in 1994 and based in Seattle, Washington.

I am illustrating these two versions of the same facts about the same businesses because far too many entrepreneurs think of their venture’s story as the latter, i.e., practical facts and dry data, when they should be sharing the former, namely a compelling story, interestingly told.

by Lighthouse: A Blog About Leadership & Management, 7/4/15.

We’ve had managers of all levels of experience and team size use Lighthouse to help them manage and motivate their teams and the common pattern we’ve seen is managers struggle most with more than 10-12 reports. It’s at 10-12 people that the complexity and demands become too great for even a well-trained, experienced manager. Just look at the diagram above and how a team growing from 6 to 10 people causes the lines of communication to grow from 15 to 45 (and 66 by employee #12!). But don’t take my word for it, here’s what some experts have said:

Jeff Bezos, CEO of Amazon.com, has a “2 Pizza Rule” which really translates to ~8 people, since a pizza is normally cut into 8 slices and 2 slices per person is a reasonable amount.

Michael Lopp, author of Rands in Repose, uses the formula 7 +/- 3, which crucially takes into account how much time you could be committed to in 1 on 1s with everyone on your team.

Tomas Tunguz, VC at RedPoint Ventures deep dives into the concept from many sources to conclude “roughly 7″ and explores how “Span of Control” and “Span of Responsibility” impact it.

The consensus appears to be that double digit team sizes are generally a sign of trouble for a manager. So what do you do? Start developing leaders on your team.

Commentary by Dr. Whitesel: “This image from StackOverflow shows the rapid complexity that arises when your team or small group exceeds 10 people.” 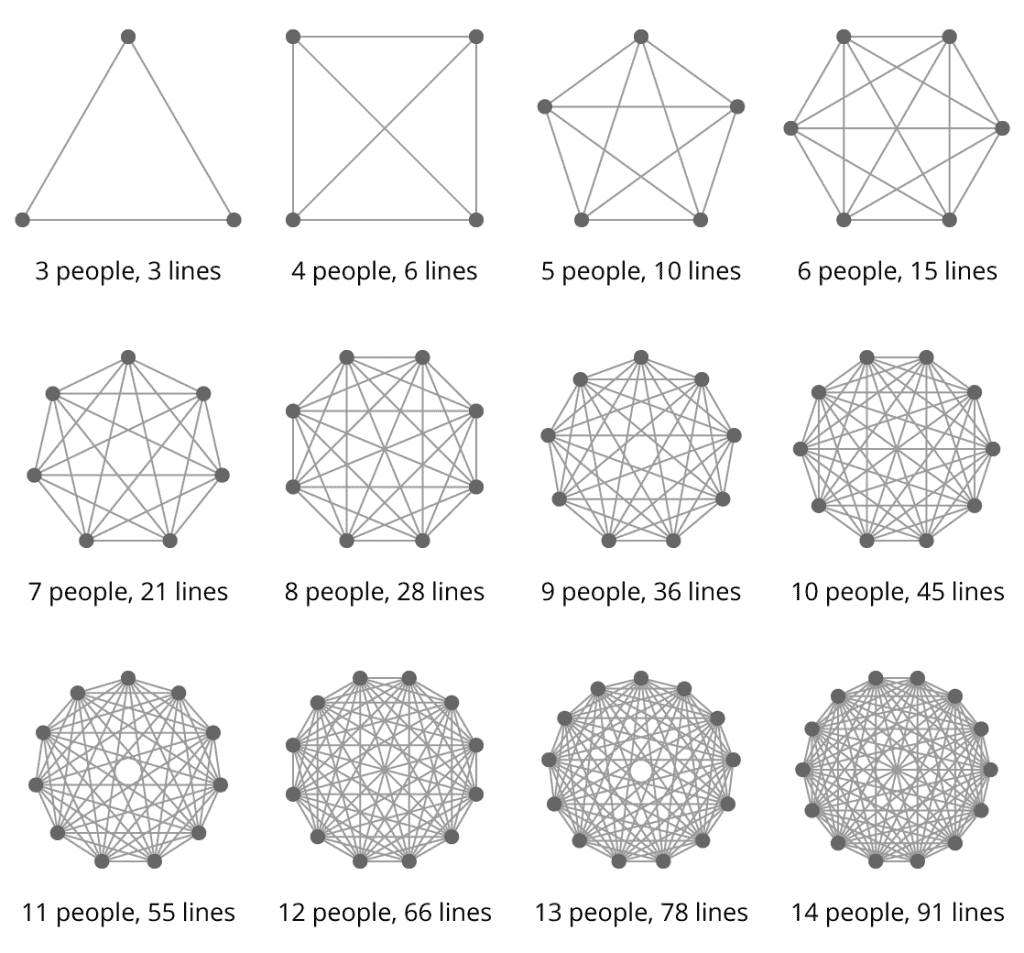