For centuries, Christians have met in sacred places that also provided safety for those seeking asylum, including runaway slaves and undocumented immigrants. But those same sanctuaries where many sing and embrace each other have become anxiety-inducing, and possibly dangerous, for many Americans who are considered higher risk for covid-19.

More than 7 million Americans have weakened immune systems that make them more vulnerable to contracting the coronavirus and can make covid-19 more deadly. Many have chosen to stay home. Those who are immunocompromised include people with medical conditions that weaken their immune response, as well as people taking immune-suppressing drugs because of cancer, organ transplants or autoimmune diseases.

As states across the country are lifting covid-19 precautions such as mask mandates and some churches have dropped online services, the immunocompromised are weighing their risk of possible exposure in worship services. And some are finding their fellow parishioners and church leaders aren’t taking measures to protect them.

The Alameda County Study is one of the most thorough and groundbreaking studies on relationships ever conducted. A team of Harvard researchers tracked a group of 7,000 people over the course of a nine-year period, and their findings were fascinating.

They discovered that people who had poor health habits (smoking, overeating, excessive drinking, etc.) but strong group ties lived significantly longer than people who took great care of their health but were relationally isolated.  To put it another way, it’s better to feast on fried food with friends than to eat Brussels sprouts alone.

The research team had stumbled upon a truth we were reminded of over the past 18 months and that God made clear from the dawn of humanity: “It is not good for the man to be alone” (Genesis 2:18). We were made for community. Commentary by Dr. Whitesel: John Wesley was appalled at how doctors to the poor usually were medical quacks taking advantage of the poor. Subsequently, Wesley’s great intellect and scientific mind drew him to the study of medicinal remedies to help the average person. Below are some of Wesley’s suggestions for a healthy life. Particularly interesting is that he recommended, “Those who read or write much, should learn to do it standing; otherwise, it will impair their health.” This is something that has been proven to be critical for today’s office workers. (Excerpts below from John Wesley’s Primitive Physick).

1. A due degree of exercise is indispensably necessary to health and long life.

3. We may strengthen any weak part of the body by constant exercise. Thus, the lungs may be strengthened by loud speaking, or walking up an easy ascent; the digestion and the nerves by riding; the arms and hams* by strong rubbing them daily.

4. The studious ought to have stated times for exercise, at least two or three hours a day; the one-half of this before dinner, the other before going to bed.

6. Those who read or write much, should learn to do it standing; otherwise, it will impair their health.

7. The fewer clothes anyone uses by day or night, the hardier he will be.

8. Exercise first, should be always on an empty stomach secondly, should never be continued to weariness; thirdly, after it, we should take to cool by degrees, otherwise we shall catch cold.

9. The flesh-brush* is a most useful exercise, especially to strengthen any part that is weak.

10. Cold bathing is of great advantage to health; it prevents abundance of diseases. It promotes perspiration, helps the circulation of the blood; and prevents the danger of catching cold. Tender persons should pour pure water upon the head before they go in, and walk swiftly. To jump in with the head foremost is too great a shock to nature.)

By the editors, The Telegraph Newspaper, London, 24 Sep 2010. Losing your faith is bad for your health, a new study suggests.

Leaving a strict religion makes people more likely to live unhealthily, with an increase in drinking and smoking, as well as becoming more susceptible to negativity and stress.

It can also lead to losing friends and acquaintances who remain devout, said Christopher Scheitle, of Penn State university.

He said: “Strict groups typically require members to abstain from unhealthy behaviours, such as alcohol and tobacco use.

“The social bonds of belonging to the group might be another factor for better health.”

The study, published in the Journal of Health and Social Behaviour, defines strict religions, such as The Church of Jesus Christ of Latter-day Saints and Jehovah’s Witnesses, as those with strict social, moral and physical guidelines for members.

Mr Scheitle examined a total of 423 cases of people associated with religions from 1972 to 2006 and compared the self-reported health of 96 people who switched to another religion and 54 people who left religion altogether with those who stayed.

Findings also showed that people who were raised and remained in strict religious groups were more likely to report they were in better health than people in other religions.

Mr Scheitle said positive thinking and the stress of leaving strict groups were other possible factors.

He said: “You could lose your friends or your family becomes upset when you leave, leading to psychological stress and negative health outcomes.”

But he said the study did not necessarily mean that leaving a religion caused poor health because in some cases poor health could prompt a person to leave, given the demands placed on them.

A belief that an “all-powerful being who failed to heal their condition” also left them feeling despondent, he adds…

by James LeFanu, The Telegraph Newspaper, 18 Aug 2014. Religious faith remains by far the best predictor of a long, healthy life

It is encouraging for those reluctant or unable to engage in vigorous exercise that the splendidly named Dr Duck-chul Lee, of Iowa State University, should have found, as reported in this paper last month, that jogging for as little as five minutes a day should be beneficial, dramatically cutting the risk of dying early.

Still, as Richard Scott, a family doctor, notes in this month’s British Journal of General Practice, religious faith remains by far the best predictor of a long and healthy life.

When convalescing recently from a gruelling schedule of chemo and radiotherapy for a tumour of the bowel, Dr Scott, a Christian, read the scholarly Handbook of Religion and Health, whose survey of the research runs to 700 pages.

The positive influence of church attendance is well recognised, but the findings of this overview are, he observes, “quite extraordinary”, with faith reducing the risk of a heart attack by two-thirds and being associated with improved survival of a stroke or cancer.

For mental health, the statistics are even more dramatic: those with depression recover faster, and those with schizophrenia function better, while alcohol and drug misuse is reduced.

“Faith in God,” he says, “is relevant to all diseases yet studied.” That belief could be, as so many nowadays maintain, illusory, but the beneficial effect in conferring “greater happiness, morale, optimism and meaning in life” is indisputably for real. 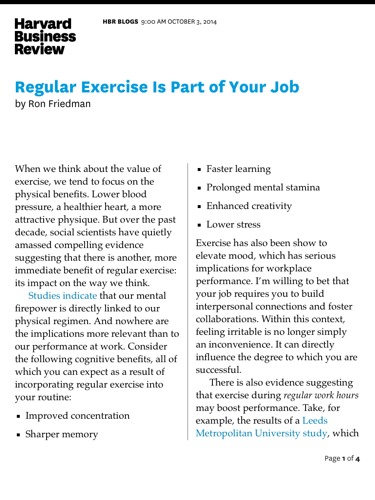 (pre-/post-exercise) were recorded. On NExD, mood was measured early and late in the working day. A 15-item work performance grid was completed at day-ends. Three on-site focus groups were held concurrently to explore performance-related topics. Findings – Among 201 volunteer respondents (67 per cent female, mean age 38.2 years), mood improved on ExD, pre-to-post exercise (all p<0.01). Performance indicators were higher on ExD, versus NExD (all p<0.01), independent of exercise specifics and workload. Positive changes in performance outcomes were almost exclusively linked to changes in mood. Inductive analysis of focus groups revealed 13 (of 17) themes exhibiting positive outcomes. Employee tolerance and resilience were central to the subjective findings. Research limitations/implications – The naturalistic, dual-paradigm study demonstrated that workday exercise can improve white-collar workers’ mood and self-reported performance on days when they exercise at work over days when they do not. There are clear implications not only for employee wellbeing, but also for competitive advantage and motivation by increasing opportunities for exercising at work. Originality/value – This is one of the few studies that addresses the acute effects of exercise in the workplace in the same people. Self-rated productivity effects attributable to exercising during the working day were strongly mediated by changes in mood. Statistical power is amplified within the cross-over design.

Commentary by Dr. Whitesel: “Many people don’t realize that John Wesley was an advocate for free health clinics at the society gathering halls. He saw meeting people’s physical needs as part of the equation to get them to listen to the answers doe their spiritual needs. In these case-study articles by Warren Bird you will find many creative ideas for helping people advance not just socially but also spiritually.”

As a career medical professional, Hilary Nicholson thought the idea of a charitable health care was laughable—that is, until a “divine appointment” and a partnership between her local church and a national organization fueled the launch of an innovative, life-changing ministry in her community… 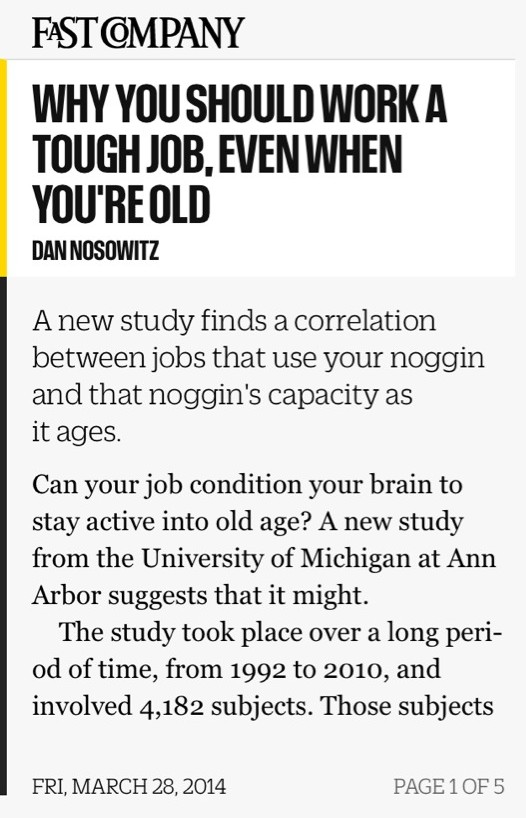 Why You Should Work A Tough Job, Even When You’re Old
by Dan Nosowitz, Fast Company, 3/28/14
http://www.fastcodesign.com/3028241/why-you-should-work-a-tough-job-even-when-youre-old?partner=rss