… The facts are straightforward: 68% of employees are rethinking what they want from their career.

As we all know, the office model for success has been relatively static since the inception of the knowledge economy post-WWII. Too many companies have abused the model and treated employees as resources to control rather than as people and lives to be optimized. But as we are learning now, the average American daily commute of 56 minutes per day, while perhaps balancing a family or caregiver responsibilities, was not high-motivation strategy.

The first thing to keep in mind is that a shotgun approach isn’t effective, and employees don’t want just more communication willy-nilly. It has to be directed with a specific purpose, and that purpose should be transparency. Transparency is going to have to be the defining theme for communication throughout the rest of the pandemic and beyond, and I need to stress the word “beyond” because I assure you, we are never ever going back to the way things used to be in the workplace pre-pandemic with regards to leadership and communication.

Next, there are three keys to keep in mind with transparent communication: make it asynchronous, scheduled, and multimodal.

Synchronous communications can force employees to waste their most productive hours in Zoom meetings and are what often lead them to make grumbled comments like, “This could have been an email.” It’s not because they don’t want to know the contents of the communication; it’s because they want to be able to get to it according to their own rhythm. So make it asynchronous.

… The other problem with synchronous communication is that it tends to be limited to one format, but employees have their own preferences for how they best process information. That could mean a video for some, an audio recording or company podcast for others, and, yes, an email for perhaps others.

… The big lesson, if you are interested in being a leader, or perhaps in being a better leader, is to move away from the traditional macho behaviors and embrace a more vulnerable leadership style. Paradoxically, tough macho leaders put their teams and followers at risk. Vulnerable leaders who don’t hide their weaknesses make their teams and followers stronger. Ironically, although many refer to the macho-type leader as an “alpha male,” the term is a misnomer. As primatologist Frans de Waal finds, in the wild, “alpha males actually possess leadership traits like generosity, peacekeeping, and empathy.”

A discernible shift from celebrating macho leaders to celebrating vulnerable leaders is underway. In an uncertain, complex, interdependent world where one tiny virus can wreak havoc everywhere, leadership characterized by overconfidence, defensiveness, and rule by fear fails spectacularly. The health results across nations bear this out. We do not claim that these differences are because of female leadership, but rather because of their effectiveness. Any leader, whether of a nation or a corporation, who is more focused on gaining fans and seeking praise than on building others’ capabilities and embracing constructive criticism is at extreme risk when agile responses are needed to cope with novel challenges.

To adopt a more vulnerable style, we recommend starting with a rational sense of humility about what lies ahead. This triggers a productive sense of curiosity that drives interest in others and in learning more about what they know and need. No leader can succeed over the long-term without that interest, precisely because they will then fail to leverage the capabilities of followers.

Commentary by Dr. Whitesel: Many Caucasians have not understood how lynching has been used as domestic terrorism to intimidate people of color. For example, a Marion, IN white police officer jokingly kidded a black colleague by tying a noose in a rope. The white officer was taken back by the immediate and deserved backlash. Take a look at this map to better understand.

…In total, in the century after the Civil War, as many as 5,000 people of color were lynched by mobs in the United States. In the 1890s, on average, nine people were lynched each month. A new website documents each known death on a map, often along with gruesome details about the killing and the size of the crowd. 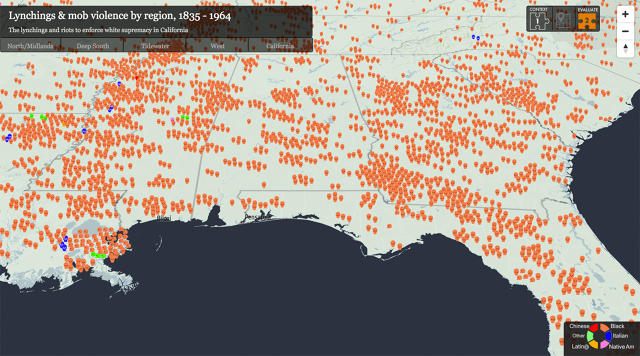 RJ Ramey, who created the site, was inspired by a book about the history of lynching called At The Hands Of Persons Unknown.

“…This is our history,” he says. “Every high school kid should know about it.”

…FlowingData’s Nathan Yau scraped the numbers from 2010-2014 American Community Survey and found that the nuclear family is still dominant—but only just.

Yau put together this in-depth chart, showing the top 50 kinds of families in the U.S. today…

To categorize the families further, Yau classified them into groups, using United Nations definitions: one-person, nuclear, extended, and composite. When clumped together like this, the family types are easier to understand. Here’s the key to reading Yau’s chart:

Relationships are relative to the surveyed head of household. Larger circles are (mostly) adults, and smaller circles are children or grandchildren. Circles are colored dark green to show the householder’s family nucleus, light green for family members outside the nucleus, and gray for non-relatives, which includes friends and partners. Connecting lines represent marriage and children, or the householder’s family nucleus.

The chart only covers the top 50 kinds of family, although Yau says that this covers around 94% of all household types in the U.S. And the nuclear family wins, barely, accounting for 54% of households. The chart is a little misleading, because if you count up the number of nuclear family squares, you only get 13 out of 50.

But the most interesting part might be that other 46%, the non-nuclear families. Nuclear is defined by the UN as any of the following: “a married-couple family, with or without child(ren), or a father (or mother) with child(ren).” That is, pretty much anyone living with their kids. Other kinds of household include siblings living together, extended families of three generations living together, or people living with friends and/or relatives. One thing missing from the UN’s guidance on family types is same-sex marriages. Then again, “a married couple with children,” also means a married same-sex couple with children, so perhaps there’s no need for clarification.

The nuclear family, then, remains dominant, but not really in the sense we understand it. We might commonly think of a nuclear family as two parents, plus one or more kids, but the definition is a lot broader than that, encompassing anything from a married couple, to a lone parent and child. Considered like this, perhaps the very definition of nuclear family has become useless because it doesn’t really mean much any more…

Commentary by Dr. Whitesel; “Most organizations, including churches, stay small because the leader only delegates to a handful of workers who she/he then closely monitors. Because research shows that a leader can only delegate effectively to about 8-10 people this results in 8 to 10 people who run a church and only about 80% more attending (the 20% worker to attendee ratio). This choke-law, whereby a small group controls a church, may be confirmed in that 75 attendees is the average size of a church in America. To break this constraint, the pastor has to move away from being the sole-proprietor of the organization and delegate to 7-8 mid-level manager/delegators. Read this Fast Company article for insight into becoming better delegator.”

Commentary by Dr. Whitesel: “To see more women leaders rising to the top jobs in our churches, research indicates we have to convince more of them that even when looking for their first job out of college, they should be aiming for the big jobs.”

BY SALLY BLOUNT, Dean of the Kellogg School of Management

…Women now make up more than half of the incoming classes in the top U.S. universities, but still only a small fraction of CEOs, board directors, and government leaders. This data makes it clear that while we’re now getting women into the game in equal numbers, we are not yet getting them through to the top.

At Kellogg School of Management, we’ve identified three critical pivot points where we’re losing women on the way to the C-suite:

Here, I focus on the launch–that critical first job after college, because the data suggests that many women may be opting out even before they start.

Recent stats from Northwestern and Harvard show that, in their first year out of college, women from these top schools are up to 50% less likely than their male peers to enter the most competitive business tracks, like investment banking and management consulting.

Yet when I look back at my own career, I realize just how important my first job at the Boston Consulting Group was for setting the trajectory that landed me as the first female dean of a top business school. At BCG, I got important imprinting in the ways of business and how markets work and began building my analytical and problem-solving skills.

If we want our best and brightest young women to become great leaders, we have to convince more of them that their first job out of college ought to be in business, and they should be going for the big jobs regardless of what career they want to pursue…

One of my favorite management magazines, Fast Company, devoted the March 2005 issue to the topic “Change or Die” (Alan Deutschman http://www.fastcompany.com/52717/change-or-die).  It is an important topic for firms to address, as well as for churches (as I hope you have seen from my book “Inside the Organic Church”).  The article “busts some myths” about change.  Here are two and an implication for bringing about change in your leadership collage.

Myth 1:  Crisis is a powerful impetus for change:  Alan Deutschman, senior writer for Fast Company, found that “90 percent of the patients who’ve had coronary bypasses don’t sustain changes in the unhealthy lifestyles that worsen their severe heart disease and greatly threaten their lives” (p. 55).  The article points out that people just give up.  They say “what’s the use?” and prepare to give in.  So the import of this research is that a crisis will not “scare” 90% of a people into change.  And thus, if we as church leaders try to say “you must change or die” the vast majority of our congregations will probably will not heed our warning.  But, there is another myth that can help us deal with this conundrum.

Myth 2:  Change is motivated by fear.  As we saw above, an outgrowth of Myth 1 is that you can scare people into changing.  But as we’ve seen in the medical profession, such scare tactics don’t bring about change (usually only generate aggravation towards the message-bearer, i.e. you 😦  Deutschman points out that people often go into denial when fear becomes too much to bear, stating “when a fact doesn’t fit our conceptual ‘frames’ – the metaphors we use to make sense of the world – we reject it” (p. 55).

Myth-busting Good News:  There is good news!  Medical researchers have found that people are motivated to change by “compelling, positive visions of the future” which “are a much stronger inspiration for change” (p. 55).  That means that optimistic, persuasive, farsightedness that elicits our imagination can help us embrace change.