In an earlier posting titled DYSFUNCTIONAL PEOPLE & Would Your Church Use These People? I posted a picture of a rather unkempt and dysfunctional-looking group of people … several of which later became some of the most influential people in the world.

I asked my students to identify them and tell me what kind of reception they would expect at their church. Many of our students say they would be kindly welcomed, but because of their disheveled look would probably be  subtly encouraged not to come back.

A student once figured out who there people were and he responded, “Unfortunately, if these people showed up at (name of church), most of my congregates would be foaming at the mouth trying to get free iPads.”

All kidding aside (for I am sure there was some truth in his observation), what would you do to help your church see such culturally-different yet powerful people have needs too?

Let’s say, for example, that you knew that Paul Allen (one of the co-founders if Microsoft) was coming to your church. You knew he was coming because he had a deep spiritual need that he felt he could find in your spiritual community.  But, most people in your church didn’t know what he looks like (most don’t today).  How would you help your church members be ready to minister to Paul rather than become obsequious, take advantage of him or ignore him? 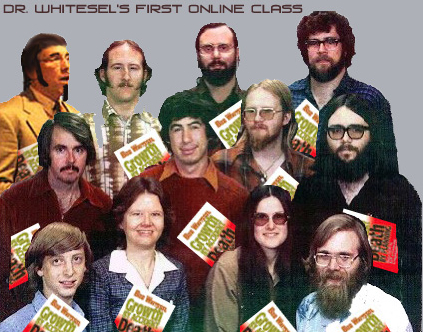 (Photoshopped picture by one of my students, who humorously implied they might be my first online cohort 🙂