September 2021 was a bad month for manners. On the 21st, a woman pulled a gun on servers at a Philadelphia fast food restaurant when they asked her to order online. On the 16th, several women from Texas pummeled a hostess at a New York City family-style restaurant. A few days prior to that a Connecticut mother was investigated for slapping an elementary school bus driver and that same week, a California woman was charged with felony assaultfor attacking a SouthWest airlines flight attendant and dislodging some of her teeth.

Our ‘fight’ instincts are triggered

“We’re going through a time where physiologically, people’s threat system is at a heightened level,” says Bernard Golden, a psychologist and the author of Overcoming Destructive Anger. This period of threat has been so long that it may have had a damaging effect on people’s mental health, which for many has then been further debilitated by isolation, loss of resources, the death of loved ones and reduced social support. “During COVID there has been an increase in anxiety, a reported increase in depression, and an increased demand for mental health services,” he adds. Lots of people, in other words, are on their very last nerve. This is true, he adds, whether they believe the virus is an existential threat or not. “Half the people fear COVID,” says Golden. “Half the people fear being controlled.”

Commentary by Dr. Whitesel:  “Having a boss that feels he/she is the expert and should approve or modify everything you do, can be frustrating (I know ;-).  But author Karen Dillon gives four helpful steps to working with a boss who she describes as a control freak.  The four tactics are:

Read the article (it begins below and continues with a link to the original Harvard Business Review article).”

What to Do If Your Boss Is a Control Freak

…Despite what you may think, the root of his micromanaging is probably not that your boss is a jerk or that he feels threatened by you. Rather, his actions might be explained by factors that have little to do with you, such as a poor understanding of his role as manager, micromanaging bosses of his own, a lack of motivation to question how he’s always done things, or personal insecurity.

That said, it can be hard to cut your boss some slack when he isn’t cutting you any. His harping about every small misstep you take can feel overwhelmingly personal. The good news is that you don’t have to resign yourself to being nit-picked to death. You may not be able to change your boss, says Carol Walker, a principal at Prepared to Lead, a leadership development consulting firm. But you do have some control. “You have more power to improve the situation than you probably realize,’” Walker says. You aren’t likely to turn things around with one great conversation or one burst of high performance. But you can, little by little, own and direct a process that will enable your boss to start trusting you more and monitoring you less. Here’s how.

Form an educated guess about where your boss’s sensitivities lie. If you believe, for example, that he’s intimidated by his boss, think of ways you can alleviate that pressure, such as running reports to better prepare him for meetings with his manager. Or perhaps he’s afraid that people don’t perceive him as essential, and he’s on a tear to prove how much you and others need him. Dispel his fears, advises Dorie Clark, author of Reinventing You: Define Your Brand, Imagine Your Future. Show him that you value his guidance. Bring him any news you hear, and take your ideas to him before sharing them with others. As your boss begins to trust that you’ll come to him without prompting, he may loosen his grip… 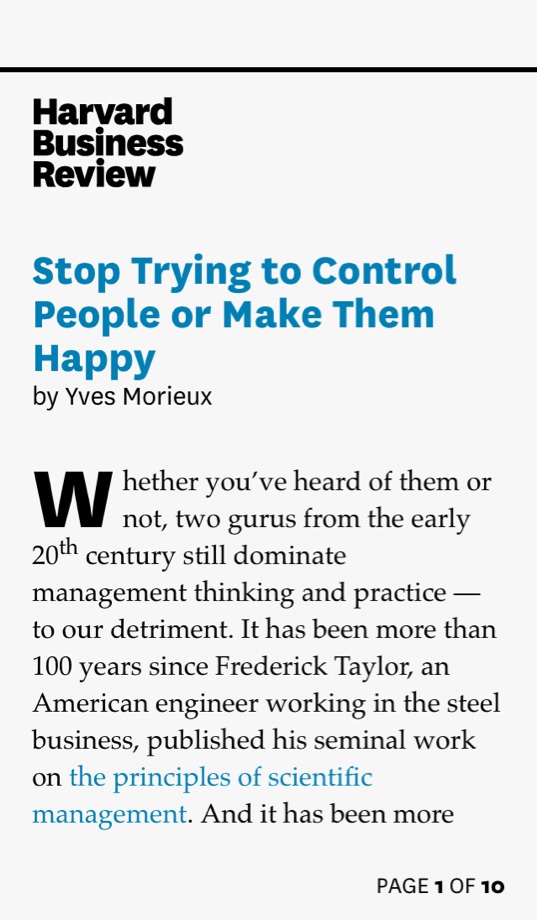 “There are six smart rules. The first three involve enabling—providing the information needed to understand where the problems are and empowering the right people to make good choices. The second three involve impelling—motivating people to apply all their abilities and to cooperate, thanks to feedback loops that expose them as directly as possible to the consequences of their actions.

The idea is to make finding solutions to complex performance requirements far more attractive than disengagement, ducking cooperation, or finger-pointing…”