Commentary by Dr. Whitesel: Like many people at Christmas, I’m fond of Charles Dickens’ stories, especially “A Christmas Carol.” I even adapted Dickens’ story for a Christmas production that ran for over 10 years, involved over 20 churches and raised money for a Christian retreat center  .

I knew that Dickens had a strong faith in Jesus Christ, and that he often referred to “real Christianity” as those who modeled Jesus’ life.   

A helpful, scholarly book has come out describing how Dickens faith contributed to the long lasting message of his books. It is titled,   ”God and Charles Dickens: Recovering the Christian Voice of a Classic Author” and available from the usual online sources.

Below is an interview with the author. I found especially memorable the following paragraphs:

Scholar and author Dr. Gary Colledge has studied the legendary 19th century English writer extensively. The Akron, Ohio, native even studied in the United Kingdom, earning a Ph.D. at the prestigious University of St. Andrews for his work on the faith of Dickens.

God and Scrooge: Finding the Faith of Charles Dickens

…Scholar and author Dr. Gary Colledge has studied the legendary 19th century English writer extensively. The Akron, Ohio, native even studied in the United Kingdom, earning a Ph.D. at the prestigious University of St. Andrews for his work on the faith of Dickens.

During his research, Colledge discovered that Dickens was a Christian and his faith in Jesus Christ surfaces throughout his works — in the themes and characters.

Colledge read a letter from Dickens to one of his critics:

“‘All my strongest illustrations are derived from the New Testament. All my social abuses are shown as departures from its Spirit. All my good people are humble, charitable, faithful, forgiving, over and over again. I claim them in expressed words as disciples of the Founder of our religion.'”

Charles, and his more well-known brother John, were the practical and theological leaders of the Wesleyan Movement, which today has grown into many varieties of Methodism, including the United Methodist Church, African Methodist Episcopal Church, African Methodist Episcopal Zion, Christian and Missionary Alliance, Church of God in Christ, Free Methodist, Freewill Baptists, Church of the Nazarene, Assemblies of God, Seventh-day Adventists, Church of Christ, Foursquare Church, Calvary Chapels, Vineyard Churches, Salvation Army, many others and, of course, Wesleyans.

In fact, a sizable 26% of all Christian denominations can trace their history back to the Wesleyan revival.

And music was an important leadership principle in that revival. Charles wrote between 5,000 and 8,000 hymns (it depends upon who you ask). He wrote the lyrics, putting them to carefully selected tunes by composers of the day. In fact, it is said that Charles dictated to his wife his final hymns from his death bed.

Charles’ motivation was because he realized that good biblical leadership required hymns to meet the needs of the congregants who sung them. And, in part his hymns were written to address an important need.

Most of Charles’ listeners where were biblically illiterate and many were functionally illiterate too. Therefore, Charles wrote hymns with clear theology, but in memorable phrases. His goal was to help those singing remember biblical truths that they could not read.

Who cannot forget memorable refrains, such as:

Hail the Heav’nly Prince of Peace!

Hail the Son of Righteousness!

Light and Life to All he brings,

Ris’n with Healing in his Wings.

Mild he lays his Glory by,

Born—that Man no more may die,

Born—to raise the Sons of Earth,

Born—to give them Second Birth.

Even in the time of the Wesleys, the religious story behind Christmas was being discarded in favor of rampant commercialism. Only a year after his conversion Charles Wesley penned these words to educate people to the unimaginable sacrifice that God took by sending his son to earth as a newborn infant.

John Wesley even said that Charles Wesley’s hymn book was the best theological book in existence.

Leaders should understand those they lead. And for Charles this meant using seasonal celebrations combined with poetry and finely crafted theology to educate those who knew little of God’s Good News.

I’ve observed that church leaders usually spend a great deal of time selecting the right music for Sunday services. And they should. But, I’ve also noticed that some music, both traditional and contemporary, tends to be weak in theology and message. Perhaps such songs are utilized because of the catchy music attached, rather than the principles embraced.

Today Christian leaders often worry about a decreasing knowledge of Christianity amid the rampant commercialism of Christmas. Charles saw a solution (which has survived almost 300 years). He wrote finely crafted and theologically powerful songs, set to memorable tunes by contemporary composers.

For more on the amazing stories of the men, women and children see … www.Enthusiast.life

And click here to read the article in Biblical Leadership Magazine.

Commentary by Dr. Whitesel: Here is another unique way to share the theology of Advent. At this time of year when people are more likely to attend church, the decorations and the consumerism can sometimes cloud the supernatural power of God sending his son to earth as a child. Here is how one church helps emphasize the theology behind Christ’s Advent.

Last December, 10-year-old Prakash Keeley proudly donned the gold-and-white bishop’s robe and miter, gripped a staff that towered over him by a half-foot, and blessed a kneeling congregation with the words of Jesus: “Truly I say to you, whoever does not receive the kingdom of God like a child shall never enter it.”

Since 2012, St. Timothy’s Episcopal Church in Winston-Salem, North Carolina, has annually enthroned a fifth grade boy such as Keeley, giving him bishop’s regalia and letting him lead the service for the Dec. 6 Feast of St. Nicholas. The tradition of the “boy bishop,” with roots dating back to medieval times, emphasizes the upside-down aspect of the Advent season.

The making of boy bishops, if only for a service, illustrates the words of the Magnificat in a physical way: “He has brought down the powerful from their thrones, and lifted up the lowly” (Luke 1:52 NRSV).

…Four in 10 Americans who never attend church (41 percent) say Christmas should be more about Jesus.

In 2015, LifeWay Research found 61 percent of Americans typically attend church at Christmastime. And among those who do not attend, 57 percent said they were likely to attend if someone they knew asked them.

In 2010 LifeWay Research asked people when they are more open to considering matters of faith. Christmas was the most common response. Almost half (47 percent) said they were more open to thinking about faith during the holiday season. 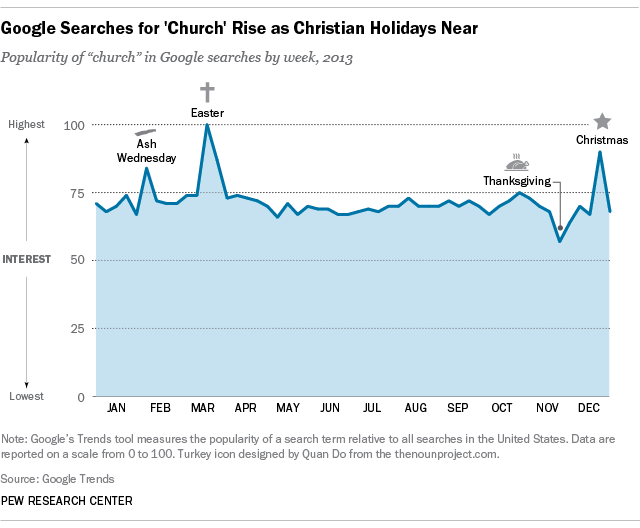 …Non-Christians are more likely to come to worship services on Christmas Eve than any other day of the year, including Easter. Church leaders get it. They are putting more prayer, preparation, and strategic thinking into the services.

There are three popular times for the service. Whether a church has one or multiple Christmas Eve services, three times are more popular than others: later afternoon (typically for families with young children and for older adults); early evening (the more traditional time); and late evening (for empty nesters and families with teenage or grown children).

The services are traditional. They include traditional hymns and carols. They may include some time for the lighting of the final advent candle.

The services are brief. The typical length is 30 to 45 minutes.

The pastor’s message is brief. The typical length is 10 to 15 minutes.

Most churches include candlelight services. They are now expected by Christians and non-Christians alike.