In the early 1990s, the historical tether between American identity and faith snapped. Religious non-affiliation in the U.S. started to rise—and rise, and rise. By the early 2000s, the share of Americans who said they didn’t associate with any established religion (also known as “nones”) had doubled. By the 2010s, this grab bag of atheists, agnostics, and spiritual dabblers had tripled in size. 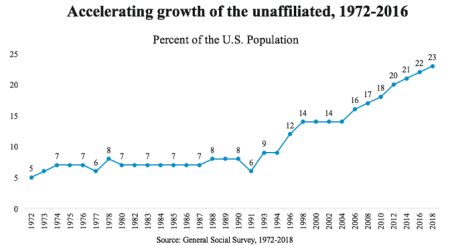 …Christian Smith, a sociology and religion professor at the University of Notre Dame, America’s nonreligious lurch has mostly been the result of three historical events: the association of the Republican Party with the Christian right, the end of the Cold War, and 9/11.

This story begins with the rise of the religious right in the 1970s. Alarmed by the spread of secular culture—including but not limited to the sexual revolution, the Roe v. Wade decision, the nationalization of no-fault divorce laws, and Bob Jones University losing its tax-exempt status over its ban on interracial dating—Christians became more politically active. The GOP welcomed them with open arms…

The marriage between the religious and political right delivered Reagan, Bush, and countless state and local victories. But it disgusted liberal Democrats, especially those with weak connections to the Church. It also shocked the conscience of moderates, who preferred a wide berth between their faith and their politics. Smith said it’s possible that young liberals and loosely affiliated Christians first registered their aversion to the Christian right in the early 1990s, after a decade of observing its powerful role in conservative politics.

Second, it may have felt unpatriotic to confess one’s ambivalence toward God while the U.S. was locked in a geopolitical showdown with a godless Evil Empire. In 1991, however, the Cold War ended. As the U.S.S.R. dissolved, so did atheism’s association with America’s nemesis. After that, “nones” could be forthright about their religious indifference, without worrying that it made them sound like Soviet apologists.

Third, America’s next geopolitical foe wasn’t a godless state. It was a God-fearing, stateless movement: radical Islamic terrorism. A series of bombings and attempted bombings in the 1990s by fundamentalist organizations such as al-Qaeda culminated in the 9/11 attacks. It would be a terrible oversimplification to suggest that the fall of the Twin Towers encouraged millions to leave their church, Smith said. But over time, al-Qaeda became a useful referent for atheists who wanted to argue that all religions were inherently destructive.