The ‘existential insecurity’ explanation for variation in religion.

Variations in religious commitment also can be attributed to differences in the way countries – and often whole regions – developed historically, and how each society practices religion. Even though these differences do not directly explain the existence of age gaps, they affect how successive generations experience religion and respond to questions about observance.

As the map above shows, the countries with the highest shares of people who say religion is very important in their lives are in Africa, the Middle East, South Asia and Latin America, while those with the lowest shares are in Europe, North America, East Asia and Australia.

This has led many researchers to observe that people in poorer parts of the world are, on average, more religious than those in societies with advanced economies.3 Other indicators of economic development – such as education, life expectancy and income equality – also tend to align with measures of religious commitment.

Pew Research Center data show, for example, a clear correlation between life expectancy at birth in a country and the percentage of its people who attend religious services weekly. That is, the higher the life expectancy in a country, the less likely people are to attend services frequently.

Political scientists Pippa Norris and Ronald Inglehart, examining findings from the World Values Survey, attribute the pattern of higher religious commitment in poor places to stark differences in existential insecurity – that is, the degree of safety and security people feel as they go about their daily lives.4

As their theory goes, in places where people face a constant threat of premature death due to hunger, war or disease, feelings of vulnerability tend to drive people to religion, which in turn provides hope and reduces anxiety. In countries with advanced economies, meanwhile, people are more likely to feel safe – in part because technology and infrastructure investments in these societies have helped people overcome many common health problems, cope with severe weather, and deal with other types of emergencies that can cause existential anxiety. Norris and Inglehart contend that people in these countries rely less on religion for emotional support or for explanations of the unknown.

When new cohorts of adults grow up in societies with greater existential security than their parents had – as may be the case in a country with improving economic conditions – young adults may drift away from religion, producing the age differences described in this report. By the same token, a decline in existential security within a country that falls into civil war or some other calamity could help to explain some of the exceptions – places where younger adults are more religious than their elders (see sidebar in Chapter 2). 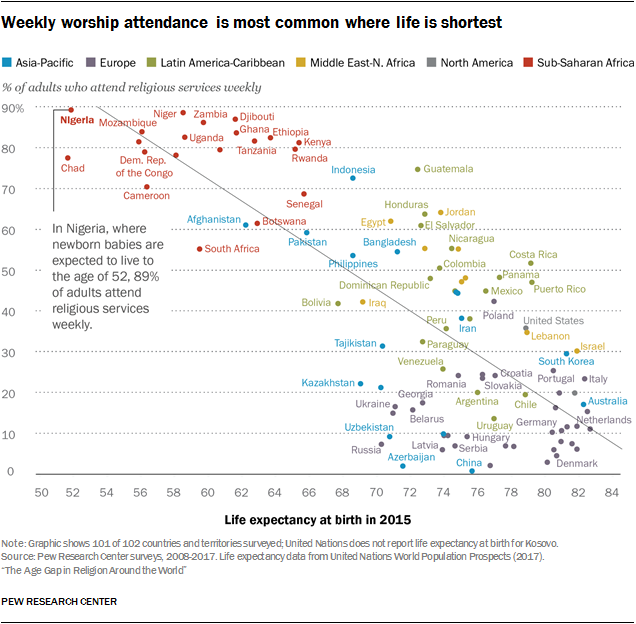