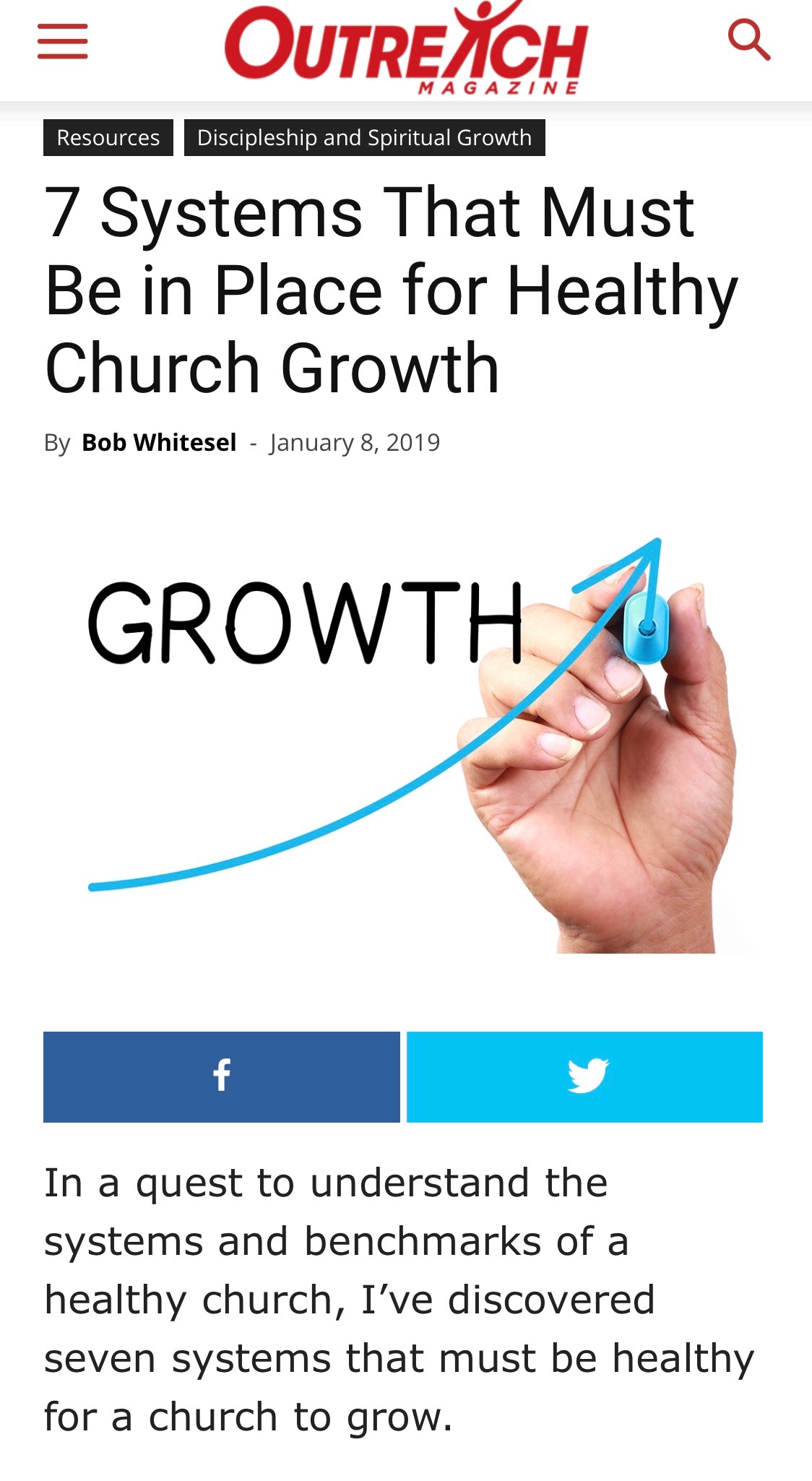 The communication system should increase the visibility of the good deeds and good actions of those who bring good news (Acts 13:32).

Visibility was historically created by a church’s physical building. A spire would stand out against the sky in London or a small town in Ohio. Building in conspicuous locations such as main thoroughfares and city crossroads became a reminder of a church and its message. Today visibility is much more electronically mediated. Websites, Facebook, Instagram, Twitter and other social media channels allow churches to be visible even when their physical location is hidden.

The benchmark is an increasing visibility among the non-churchgoing community of the spiritual growth of the faith community and the positiveness of their message.

A study of 32,000 churches (The American Congregations Survey) found that growing churches reach out to growing cultures. A growing culture might be an influx of younger families to which an aging church might adjust its traditions. A growing culture could be an African-American community that together with a dwindling Anglo church works to overcome historical differences in order to experience racial reconciliation and health.

But there is another important aspect to reconciliation. Paul stated, “Because of this decision we don’t evaluate people by what they have or how they look. We looked at the Messiah that way once and got it all wrong, as you know … Now we look inside, and what we see is that anyone united with the Messiah gets a fresh start, is created new. The old life is gone; a new life burgeons! Look at it!” (2 Cor. 5:16–17). Paul continues, “Now all these things are from God, who reconciled us to himself through Christ and gave us the ministry of reconciliation, namely, that God was in Christ reconciling the world to himself, not counting their trespasses against them, and he has committed to us the word of reconciliation” (2 Cor. 5:18–19).

Healthy churches to do stop at cultural reconciliation (any more than Paul did when reconciling differences between the Greek/Roman and Christian/Jewish cultures). Like Paul, a healthy reconciling system says, “Therefore, we are ambassadors for Christ, as though God were making an appeal through us; we beg you on behalf of Christ, be reconciled to God” (2 Cor. 5:20).

How well does your church reconcile people to one another and to God?

“Numinous” is a theologian’s term for coming close to God. “Worship” in Hebrew carries the idea of reverence, such as bowing to kiss the king’s feet, that results from a close encounter (Brown, Driver and Briggs, A Hebrew and English Lexicon of the Old Testament). When people use the word “worship” they are describing an environment where they feel face-to-foot with God.

Regeneration most notably happens at conversion (2 Cor. 5:17). And though spiritual transformation may sometimes be downplayed as it is unfashionable, people still want to be changed (the self-help industry is a testimony to this). Furthermore, the Bible makes clear that spiritual transformation lies at the center of Jesus’ message (John 3:16) and humankind’s destiny (Rom. 6:23).

When people are spiritually transformed, so too will be their neighborhoods. Not by politics or coercion, this happens by transformed people daily living out their changed lives (Acts 2:43–47). Healthy churches embrace a system that equally emphasizes spiritual and neighborhood transformation.

This results from 3 STRand leadership (Ecclesiastes 4:12), a balance between three types of leaders.

Strategic leaders are visionaries who see future goals but don’t see as clearly the steps to get there. A biblical example is the apostle John, who sketches the grand scenario of Jesus’ ministry, but leaves out many of the contributing details.

Tactical leaders enjoy watching how analysis and numbers lead up to a goal (Gr. taktike, meaning: to set in order). Found in professions like medicine, accounting, etc., a biblical example would be the physician Luke (Col. 4:14), who fills in many of the details that lead up to the actions that John describes. Tactical leaders take ideas generated by visionaries and enjoy putting together steps to accomplish them.

The relational leader leads through deep personal relationships with others. Functioning well in a small group/team environment, they watch out for one another’s spiritual progress.

Leaders are a mixture of all three, but most have a propensity for one over the others. The strategic leader sees the long-term direction of the church, the tactical leader sees the steps necessary to get there and the relational leader gauges how people are feeling about the direction. A healthy leadership system ensures that major decisions involve input from all three types.

The healthy church anticipates disunity and utilizes two tools to prevent escalating into serious conflict. First, they slow down the introduction of new ideas, building broader consensus before they implement new ideas. And second, when disunity arises, they get the two sides talking together and finding common ground.

The ability to build consensus for new ideas before implementation and to discuss differences of opinion before they fester are two benchmarks behind an effective unity system.

A healthy church knows what it does well and focuses on it. Such a core competency is noticeable in the community where it is viewed as a signature ministry, e.g. children’s ministry, music ministry, missionary churches, a food shelf, grief recovery ministry, divorce recovery ministry, etc. The church is not trying to do many things poorly, but a few things well.

A signature ministry is not something that meets the needs of the congregation or congregants, but rather meets non-churchgoers’ needs (and they are glad the church does so). It is an underlying, church-wide competency that the church does well in many different ministries throughout the organization, hence it is called a “core” competency.

The church is so competent in this area that people outside the church may recognize this in various signature ministries. People are attracted to your church because these are things you are good at and they resonate with that. It also means that new ministries in the church (and the longevity of older ministries) will be evaluated based upon how well they dovetail with this greater church-wide competency.