Commentary by Dr. Whitesel: I wrote a book titled “ORGANIX: Signs of leadership in a changing church (Abingdon Press) in which I showed what churches can do to serve the needs of the non-churchgoer in a way that will offset the way they increasingly view the church as critical, judgemental and insensitive.  I pointed out that most people held similar opinions before the Wesleyan revivals broke out and i describes what churches can do to recapture Wesley’s organic methods

To find out what your church can do to help people that are increasingly skeptical … read this article and then take a look at the 8-strategies in my book “ORGANIX: Signs of leadership in a changing church (Abingdon Press).

“What Millennials Want When They Visit Church” by Cornerstone Knowledge Network and Barna GroupBarna Research, 3/4/15.

…substantial majorities of Millennials who don’t go to church say they see Christians as judgmental (87%), hypocritical (85%), anti-homosexual (91%) and insensitive to others (70%). 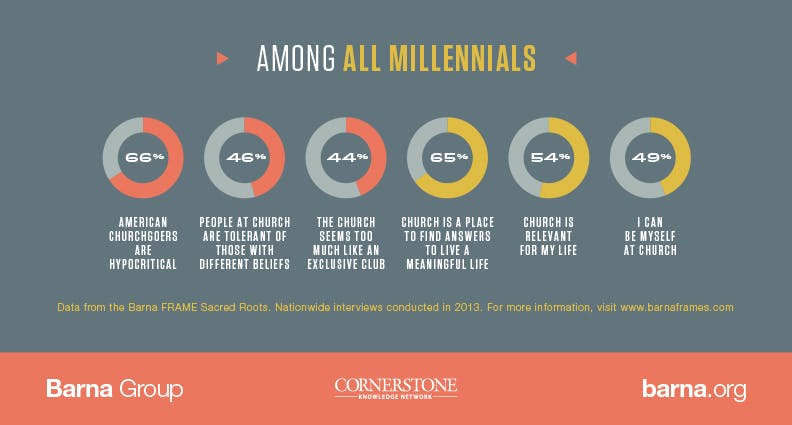 During a national, multi-phase research program among Millennials, conducted in partnership with Cornerstone Knowledge Network, participants were asked to rate how well each statement in a series describes the Christian community in America. Fewer than half of Millennials agree that the statement “The people at church are tolerant of those with different beliefs” describes the church (a lot + somewhat = 46%). About the same proportion say “The church seems too much like an exclusive club” is an accurate description (44%). Taken together, a significant number of young adults perceive a lack of relational generosity within the U.S. Christian community. Perhaps more concerning are the two-thirds of Millennials who believe that American churchgoers are a lot or somewhat hypocritical (66%). To a generation that prides itself on the ability to smell a fake at ten paces, hypocrisy is a worrisome indictment.

These negative perceptions are not limited to word descriptions. One phase of the Barna/CKN research program included visual polling, and when asked to select the image that best represents “present-day Christianity,” Millennials show the same basic pattern. 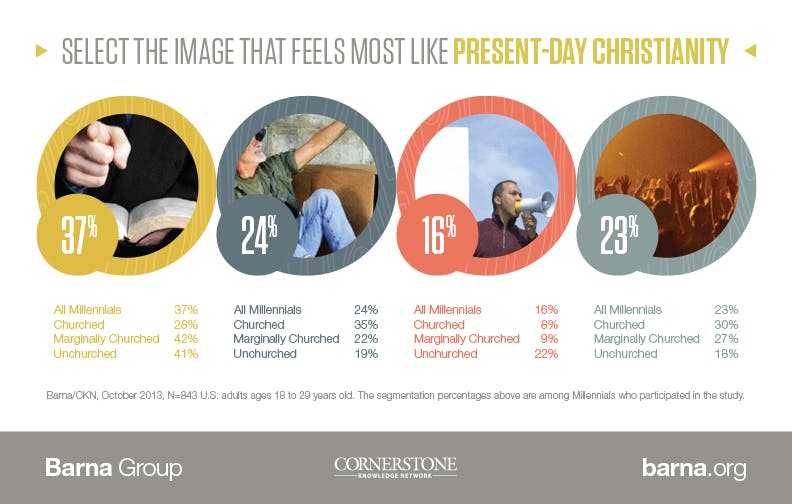 A majority—from all faith backgrounds, including Christianity—chose one of the two negative images. More than one-third chose the pointing finger (37%), and another one in six chose the bullhorn-wielding protestor (16%). In total, 52% of respondents view present-day Christianity as aggressive and critical.