Commentary by Dr. Whitesel: In my coaching and mentoring of church planters, I have found them increasingly open to going to hard-hit urban and rural areas. This map shows that some of the most needy areas are in rural Appalachia. One of my former students (who shadowed me for a year to learn consulting) Jay Wise, pastors a church in the middle of the red zone. Read this article to understand more … so you can pray for Jay and consider supporting ministers who labor in these challenging environments.

Researchers have mapped out deaths from alcohol, drugs and violence across the U.S. and found troubling patterns of despair that have worsened in recent years.

While deaths from alcohol abuse, suicide and violence are down, they are more than outweighed by a gigantic 600 percent increase in drug overdose deaths, the team at the University of Washington found.

Their county-by-county breakdown of mortality data going back to 1980 paints an extremely detailed picture of where society is failing the most Americans.

“Every county experienced an increase in deaths from drug use disorders, but that burden of drug use overdoses was particularly acute in certain communities,” Laura Dwyer-Lindgren and colleagues wrote in their report, published in the Journal of the American Medical Association. 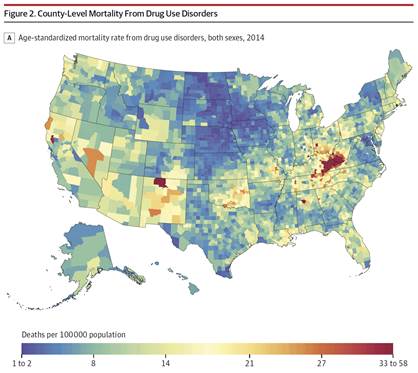 Death rates from drug abuse have increased by more than 600 percent since 1980, county-level data from the University of Washington shows. University Of Washingtonh