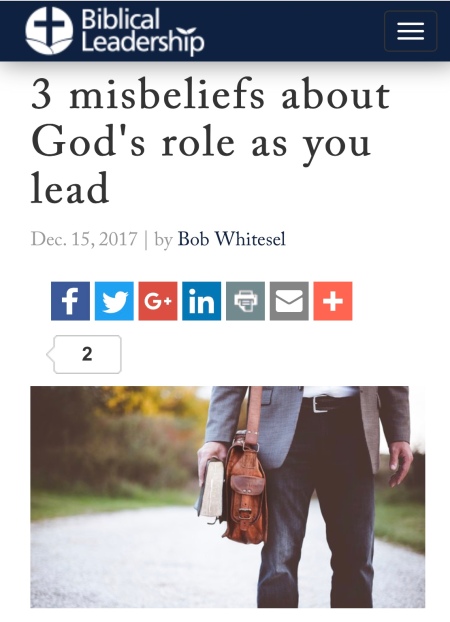 How do you view God’s part as you live out of a leadership position? Here are three perils to modern leadership and the flaws within these misbeliefs.

1. God makes the work easier for the leader.

A viewpoint has risen within Christianity that believes if God is pleased with our efforts, he will make the work easier. Sometimes this is signified by a theology of abundance where a faithful leader should expect God to make the leader’s path more affluent and unproblematic.3 There are several flaws with this thinking.

Flaw 1: Blessings can overshadow buffetings.Often, churches are more familiar with the promises of blessings than they are with the warnings of buffeting. While there are scriptural promises that God will bless us, there are also warnings of difficulties that lie in following Jesus. Since prosperity writers often cite passages from 2 Corinthians,4 let’s look at a brief comparison of Paul’s thoughts in this book.

Flaw 2: Modern leaders can come to expect privilege, with a right to ease and com- fort. King David’s temptation with Bathsheba occurred after he dodged his king- ly duty of leading his men into battle, staying behind because of feelings that he deserved this luxury. Theologian Joyce Baldwin observes, “While others spent themselves and risked their lives, he was ‘killing time,’ acting like one of the kings of the nations round about, and exercising a kind of ‘right of a lord’ ” (to do whatever he pleased).8 As we see from David’s story, if leaders expect God to always make their work easier, a false sense of privilege and entitlement can blind leaders to their duty and even to temptation.

Flaw 3: Modern leaders can question God’s participation if the work does not get easier.Prosperity thinking can thwart perseverance and persistence because a leader might conclude that if the route is not easy, God must not be in it. This thinking can leave leaders like Joan unprepared and confused by the onset of hardships. Criticizing his generation, Thomas à Kempis wrote,

Jesus hath . . . many desirous of comfort, but few of tribulation. . . . All desire to rejoice with him, few are willing to endure anything for him. Many follow Jesus unto the breaking of bread; but few to the drinking of the cup of his passion. . . . Many love Jesus so long as adversities do not happen. Many praise and bless him, so long as they receive comforts from him.9

All three flaws remind us that although God promises to bless his people (2 Cor. 4:18; 8:9; 9:10-11), there are also buffetings that accompany the mission (2 Cor. 4:17-18; 11:23-28). The modern inclination that God principally makes the work easier for the leader is not only unbiblical but also potentially debilitating.

Another peril is that modern leaders will allude to the presence of God as a sign of validation for their ministry and/or vision. This manifests itself in several ways.

Flaw 1:Modern leaders may believe visions and dreams validate their leadership and will inspire followers. Supernatural revelation is a way that God can and does reveal his
will (John 16:13), but many modern leaders overly apply and misapply this to
buttress personal vision. Oral Roberts infamously declared that unless $8 million was raised, God would “call him home.”10 Whether Roberts felt God’s warning would validate his plea for funds, inspire more giving, or was just a personal warning, to state it so publicly became self-serving. Modern leadership sometimes mutates into a view that because God has blessed and set apart the leader, followers should follow her or him (and by extension bless the leader too). Henri Nouwen warns pastors this is leadership based on “the temptation to be spectacular,” a temptation the devil offered Jesus when he bid him to throw himself from the temple.11

Flaw 2: Modern leaders can believe that because God’s presence is so pervasive in their lives, God excuses them from corporate worship and prayer.Modern leaders will often feel that because they have so much personal time with God, they do not need congregational times of prayer, worship, and fasting. In a large and thriving church, leaders who were once actively involved in public worship will often be found backstage chatting during worship and prayer.12

God’s presence is certainly needed for church leadership. But when leaders rely primarily on status and not fruit, they ignore Paul’s advice:

If anyone wants to provide leadership in the church, good! But there are preconditions: A leader must be well-thought-of, committed to his wife, cool and collected, accessible, and hospitable. He must know what he’s talking about, not be overfond of wine, not pushy but gentle, not thin-skinned, not money-hungry. (1 Tim. 3:1-3 THE MESSAGE)

Excerpted from Organix: Signs of Leadership in a Changing Church, by Bob Whitesel (Abingdon Press). Used with permission.

3 For an overview of the prosperity movement and its influence on modern church leadership see Simon Coleman, The Globalization of Charismatic Christianity: Spreading the Gospel of Prosperity (Cambridge: Cambridge University Press, 2000). And, for an interesting examination of prosperity in African-American congregations see Stephanie Y. Mitchem, Name It and Claim It? Prosperity Preaching in the Black Church (Cleveland, OH: The Pilgrim Press, 2007).

5 The Amplified Bible is customarily cited by the prosperity movement because its amplifications emphasize the eminence of the blessing, c.f. Joyce Meyer, Prepare to Prosper: Moving from the Land of Lack to the Land of Plenty (New York: FaithWords, 2003), p. 10. Meyer rightly notes that when God bestows his bounty it is usually accompanied by a responsibility to help the needy (p. 23). But, charitable opportunities and tactics are not addressed to any great degree in this book.

7 Whether buffetings are sent by God, allowed by God or autonomous work of the devil is beyond the score of this book. Readers who want to study this topic further may wish to start with: C. S. Lewis, The Problem of Pain (New York: Harper One, 2001), Philip Yancy, Where is God When It Hurts (Grand Rapids, MI: Zondervan, 2002) and Timothy Keller, The Reason for God: Belief in an Age of Skepticism (Boston, MA: Dutton Adult, 2008).