Commentary by Dr. Whitesel: This article from Harvard Business Review illustrates what I try to communicate to my students. And that is, that “great” leadership which revolves around forceful leading in times of danger or calamity is very different from “good” leadership which often is more collaborative and utilized in times of relative harmony. I outline the differences in the book ORGANIX. Read this article to understand more of the nuanced differences.

The Difference Between Good Leaders and Great Ones

…That anyone can develop as a leader is not in question. What I dispute is the stubborn resolve that great and good are points along the same stream. That just isn’t so. Great leadership and good leadership have distinctly different characteristics and paths. Leadership is not one-dimensional. It can be great and good, or one but not the other, or neither.

Uses of “great” usually begin with descriptions of being unusually intense or powerful, either “to great effect” or “a great effort.” In that sense, great is a force. True, great also means “excellent,” but that is not its primary meaning. As for “good,” we usually reference morality, virtue, and ethics — “a good person” or “a good decision.” Good can refer to the quality of something — contrasted against the commonly understood opposite, bad — but in this context good refers to the direction in which behavior is compelled.

Great leadership is powerful, dominating, often overwhelming. It can sweep people along through sheer animation. Great leadership excites, energizes, and stimulates. It’s a rousing call, shocking complacency and inertia into action. It’s one of the most potent pulls in human history, and as such accounts for much of humanity’s progress, as well as its suffering. While it ignites collective action and stirs passion, its direction depends largely on those that wield its power. Great has no inherent moral compass, and thus its unpredictable potency can just as easily be put toward pugilistic and peaceful purposes.

To speak of good leadership is to speak of protecting and advancing widely accepted principles through means to ends. It denotes doing the “right” thing. There may be legitimate differences in interpretation of what’s right and wrong, but long-standing ethics, mores, and customs of conduct that have allowed individuals and collectives to survive and thrive are remarkably similar across culture and time. Good heeds the best interests and welfare of others.

Good leadership is not as arresting as great leadership. When good rules the day, it’s not so noticeable, as things are transpiring as they should. Great is dramatic, whereas good is the blended background, a values-based screen upon which great deeds unfold. This accounts for why the force of great often overshadows the direction of good. 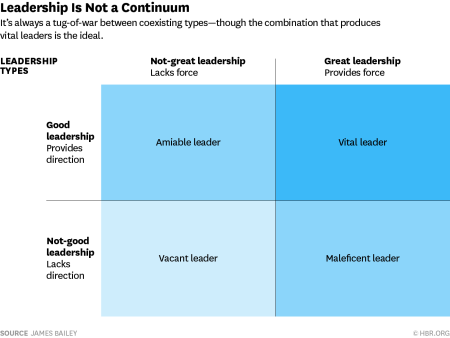 The tug between great and good leadership is one of perpetual and dynamic coexistence. There is great — a force that is often inexplicable, occasionally irrational, and, importantly, intermittently ungovernable. Then there is good — a direction that is north-star true, providing the point of values of mutual benefit. The former moves, the latter aspires. The figure below illustrates the relationship.