Not only are they not showing up for services, a growing number of millennials believe churches are bad for society.

Since 2010, millennials’ view of churches and other religious organizations as having a positive effect on the country has fallen 18 percentage points, according to Pew Research.

In 2015, 55 percent of young adults believed churches have a positive impact on the country compared with 73 percent five years ago. 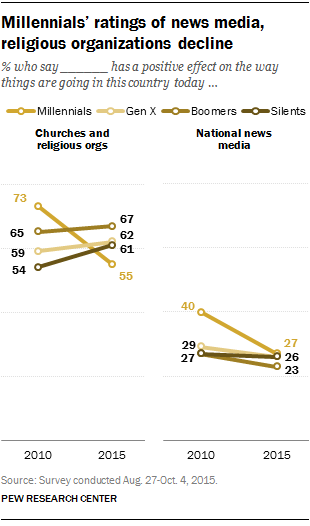 The drop among millennials comes when other generations view churches more positively. In 2010, millennials had the highest view of churches. Today, it’s the lowest of any generation.

Churches weren’t the only institution about which millennials grew more cynical. Five years ago, 40 percent of young adults thought the national news media had a positive impact. That portion is only 27 percent today, largely in line with other generations’ view of the national media.

By and large, however, millennials didn’t fit with the perception they are anti-institutional. Among every institution, except the church, young adults were the most likely to say it was having a positive effect on the way things are going in the country today. Generally speaking, the younger you are the more likely you are to see non-religious institutions as having a positive impact on society.