Commentary by Dr. Whitesel: Catherine J. Edin and Marla Kefalas immersed themselves in the lives of unwed mothers in Philadelphia. The result was the best-selling book, Promises I can keep: Why 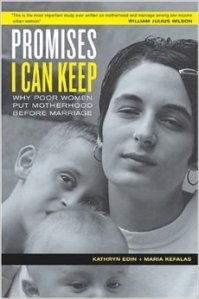 poor woman put motherhood before marriage, (Univ. of Calif. Press, 2005). An important read to understand poverty and its impact upon women, The Los Angeles Times summarized it this way “She (Edin) found that many of these women sought children as a source of love and meaning while disdaining marriage to men unable to provide economic stability” (Julia M. Klein, “Clear-eyed compassion for those stricken by poverty,” Los Angeles Times, October 4, 2015, p. F10). Read their book for more insights. In addition Edin’s follow-up tome (co-authored with H. Luke Schaefer) is another insightful read, titled $2.00 a day: Living on almost nothing in America, (Houghton Mifflin Harcourt, 2015).