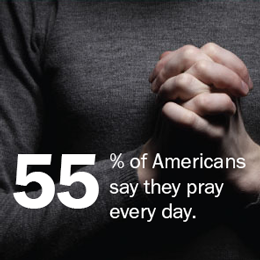 May 7 is the National Day of Prayer, on which presidents annually proclaim that “the people of the United States may turn to God in prayer and meditation at churches, in groups, and as individuals.” The day has spawned a rival National Day of Reason on the same day, started by humanist groups and other opponents of the National Day of Prayer. Fact Tank has updated its post with five facts about prayer – including survey data on Americans’ prayer habits and historical instances of prayer intersecting with the government…

(Three of the five facts include the following)

4. A 2010 USA Today/Gallup poll asked Americans specifically about the National Day of Prayer. A majority (57%) said they favored having the Day of Prayer, while just 5% said they opposed it. A significant share (38%) said it didn’t matter to them either way.

5. Last year – in the case Town of Greece v. Galloway – the Supreme Court ruled that U.S. legislative and administrative bodies may begin their sessions with a prayer. On some occasions, however, the high court has rejected other types of state-sponsored prayer. For instance, in 1962’s Engel v. Vitale, the court famously struck down a policy requiring public school students to begin their day with a nonsectarian prayer.